Written by sergeyy on July 27, 2017. Posted in Uncategorized

Caulking is a material used for sealing joints in various substrates. The benefits of caulking are to provide an aesthetically pleasing finish to the substrate and to prevent moisture from penetrating, causing deterioration. However Caulking is not suitable for use on all substrates and when used on wood siding, can actually cause more harm than good, as shown below 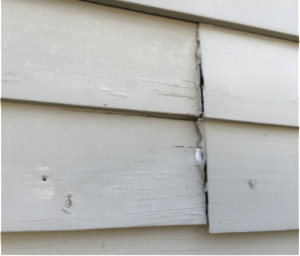 Caulking is not recommended for use on butt-joints on wood siding, as siding boards are designed to expand and contract with the elements in ways that the caulking cannot. For example, when heated in the sunlight the wood siding will expand both sideways and outwards.

This was a problem found during an inspection of painting preparation work on a recent repaint project. There was evidence of the caulking failing between all of the butt joints (see image above). The use of caulking was an attempt to correct other issues with the building, however, the caulking failed causing moisture to become trapped behind it resulting in wood rot and failure of both the coating and the caulking.

Another area that Caulking should not be used is on trim boards that sit on top of the siding. On most homes the trim goes up after the siding is installed, which creates a large gap that should not be caulked. It requires strip flashing instead of caulking to deflect moisture from behind.

The air needs to circulate behind these boards and the opening allows for any trapped moisture to be released. The bottoms of sidings boards should not be caulked for the same reasons.

Caulking should be used sparingly on any external wood siding projects, and as seen in the inspection described above, and not on wood butt-joints because of the expansion and contraction in the elements.

The caulking was used in an attempt to correct other issues, but it failed and offered no protection resulting in the costly requirement of having to replace all of the deteriorated wood siding and trim.